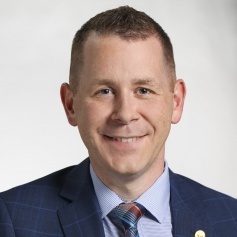 Originally from Quinan, in southwestern Nova Scotia, Mr. LeBlanc understood from a young age the importance of being actively involved in his community and preserving Acadian culture and the French language. After obtaining a Bachelor of Science from Université Sainte-Anne, he received his primary care paramedic training at Medavie HealthEd and started his career. Mr. LeBlanc furthered his studies and obtained his advanced care paramedic certification at Holland College.

A paramedic and an active volunteer in his community, Mr. LeBlanc was formerly president of the Conseil acadien de Par-en-Bas and is a past member of the board of directors of the Fédération acadienne de la Nouvelle-Écosse and Université Sainte-Anne’s alumni association. He also worked as a substitute teacher in Conseil scolaire acadien provincial schools in the Argyle area.